Yaniv Engineering Company carried out the project of building offices for the “PROFIT” insurance company in Petah Tikva.

The floor was designed to be a banquet hall, but a change of designation was made and the floor was adapted to an office complex with 197 offices, public areas such as main lobby, cafeteria, training rooms, meeting rooms and executive offices.

In this project, we faced several challenges:

For this purpose, we have raised the floor with two layers with a total thickness of 15-27 cm in a variety of ways that provide a solution to the allowed fixed load limit in the floor, which has changed between the areas on the floor. The solutions that were implemented are listed below:

In addition, as part of our creative engineering solution, we created two layers of ceiling on various levels and heights, in order to reach the final required height while leaving room for infrastructures and systems and maintaining the planning according to the requirements of the project consultants and architects.

In practice, we reduced the height of the floor from 5.40 meters to 3 – 4.7 meters by raising the floor on one side and lowering the ceiling on the other side.

The architectural design and the complex finishing materials that were implemented in the project required us to carry out activities step by step and not in parallel, a fact that obliged us even more to meet the timetable we had planned at the beginning of the project.

Ceilings of different heights and types:

Walls cladding with 3D decorative plaster tiles in a size of 60/60 cm manufactured by Barkai Systems.

Yaniv Engineering has allocated all the necessary resources in order to achieve the optimal result both in quality of performance and in meeting the timetable. In terms of personnel, a project manager was employed and he was present at the site during the entire period of the work, in addition to a supervisor who was in charge of the engineering aspect and another supervisor who was responsible for the logistical and safety aspects.

The company’s executive director and the CEO participated in all of the weekly meetings and helped to shorten the timetable and to release bottlenecks that arose during the work. 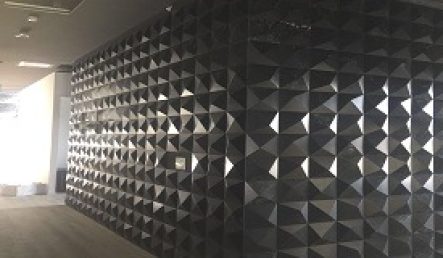 For news and updates please sign up for our Newsletter